Ken Gibson.  His name came into my consciousness a good twenty years after I'd grown to know him as "Vincent Hedges".  To me he was always Vincent, that funny vampire character on the Acri Creature Feature.  There was something about him that was endearing -- his jovial attitude and enthusiasm were contagious.  Many young kids and older kids-at-heart embraced the amiable Vincent Hedges.

But who was Ken Gibson?  I'd heard tales of a left-handed bowling champ.  I wanted to say thank you to this man who had shaped such a significant part of my childhood -- the part that imagines, dreams and invents.

Kenneth Harry Gibson was born on October 23rd, 1932 in Clinton, Iowa.  After high school in Clinton, Ken attended college in Bismark, North Dakota and at Scott Community College where he received an Associate Degree in Nursing Home Administration.  The Korean War called and he served as a private in the Army.  Ken returned to the Quad Cities area and lived in Davenport and Williamsburg, Iowa and Carbon Cliff, and Kewanee, Illinois.

In 1961, Ken was the Iowa State All Events Bowling Champion.  He was a member of the 700 Bowling Club of America.

Ken was a health care administrator for many years at the Williamsburg Care Center.  He also was actively involved at the VA Medical Center in Iowa City as a volunteer. 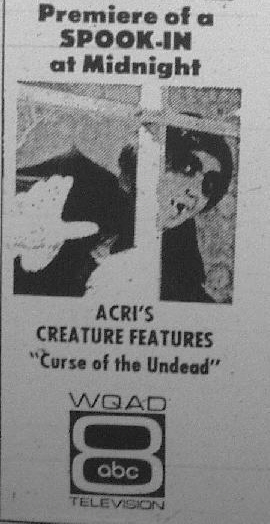 Around the age of 38 in October, 1970, Ken became the horror host of Acri's Creature Features.  Spooky old movies and Vincent Hedges' silliness would entertain and inspire a massive audience of young and old alike.

Vincent, joined by other characters like Emmett the hunchback and Beauregard the werewolf, brought joy and jolts of fun to everyone.

The cast of characters from the show also did live fund raisers and charity events.

It was the charity work that seemed to mean the most to Ken and something he worked at most diligently.  After the Acri work he helped to create an organization called Creeps for Charity.

As time crept by, as it inevitably will, Ken found himself at the VA Medical Center as a patient.  After a short illness he passed away on September 28th, 2006.  He was 73, just shy of his 74th birthday.

I received an email from Ken's son-in-law, Phil, two nights ago with the sad news.  It reads:

"My name Is Phil Mitro. My father-in-law is Ken Gibson, a.k.a., Vincent Hedges. [He passed] away this morning at 12:40am, September 28, 2006, at the VA center in Iowa City. He could not believe how much you kept Acri Creation Feature alive, and, Vincent Hedges. I wanted to let you know before it hit the paper because you kept him alive through your web page. TV was much different back in the early 70s, relatively new, so he brought laughter in the world, or just our part of the world. So please let Phil from Dubuque and Steven Jones know. I just recently found your web page and have been following it for the last few months. I did show this to Ken and he couldn’t believe the following your web page had. So thank you from the Gibson Family for keeping the greatest Creep alive in print and in your heart. And [thanks to] Phil from Dubuque and Steven Jones and the rest of the creeps who sign your web guest book. So for right now I will let you go and again want to thank you from our hearts and help us remember Vincent Hedges and the man who played him, Ken Gibson."
-- The Gibson Family"

I was saddened, but grateful that my thank you had at least reached him in the form of this website.  I was glad that he witnessed and was impressed by the thank you that we all gave him.

Many emails flowed in over the next days from the network of fans we've made here, some excerpts of which follow:

"I send out my deepest regrets to the family of Ken Gibson. Your loss is our loss too. Many more folks than you'll ever know will fondly remember the hours of entertainment given to us by Ken and the cast of the Acri Creature Feature. He will forever be a part of the rich history of early local television. God rest his soul."  -- Mike Isenberg

"I am so sad to hear of Ken's passing.  I so enjoyed working with him the few times I was on the show.  He provided me many hours of laughter as I watched the antics of Vincent and Emmett, and I'll never forget him."         -- Martie Vacek

"A part of childhood has passed with Vincent Hedges' passing."  -- Jay Bowman

"Thirty five years after the fact, I still vividly remember meeting Ken Gibson when my buddy Dave and I appeared on the ACF. Even sans his costume, we instantly recognized Ken when he greeted us outside the WQAD studio that Thursday evening in September 1971. He was so down-to-earth, so friendly, so attentive, and so complimentary. We instantly felt comfortable with him. He personally escorted us around the studio and introduced us to the other actors and the production crew. He then arranged for us to see operations in the control booth, and most memorable, he let us watch him don his Vincent Hedges costume. He explained every step of the process from applying foundation to the spirit gum for the sideburns and eyebrows. When the time came to tape our segment, he coached us on what to say and helped us enter the set on cue—although I still managed to botch the lines he gave me. He was really large and in charge of the entire creative process. Throughout the evening I did not sense one whiff of ego on his part. He was a total gentleman through and through. When it came time to leave, he stood at the door, sitll in costume, and waved goodbye as we walked to the parking lot. I never saw him again, but as my buddy Dave said on air that night: 'We will never forget you.' I think that pretty much says it all."  -- Phil from Dubuque

More notices of the passing of Kenneth Gibson:

Quad-City Times  - you can sign or read the guestbook.  Thanks, Bob, for pointing this out.

Ken will be remembered for his enthusiasm and energy.  He loved music, bowling, having fun, being a ham and he loved people.  What's more? One of our friends remembered Ken as Vincent riding a bicycle through a store.  I remember this gentle vampire always giving the peace sign.